Nearly half of Washington women have experienced sexual violence in their lifetime. In 2019, Washington Department of Health came to C+C with a huge challenge: do something about it. Together, we developed a pilot behavior change campaign that reached people early – in middle school – to promote social norms about boundaries and consent. Deeply rooted in audience research, the “It’s About Respect” campaign keyed off insights that students wanted to hear from peers, and responded best to quirky things – like talking cats.

Through in-school posters and targeted digital advertising, the campaign drove real behavior change as students in the pilot school were 39% more likely to ask permission before touching others and 46% more in agreement with statements about boundaries and consent. C+C and DOH ran a statewide campaign for two weeks in the late summer of 2020.

In addition to the overall design of the YouTube and Snapchat ads, I photoshopped and animated the cats to say the campaign tagline, “It’s About Respect.”

A client of C+C | All About the Good 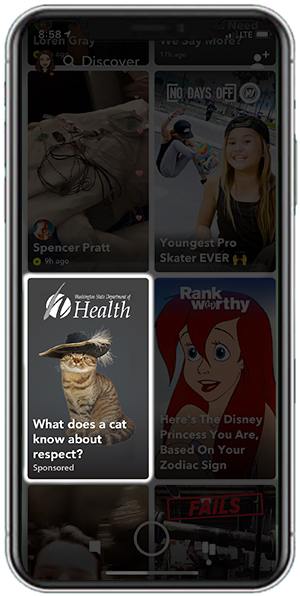